If you need waste management solutions, we are available for you 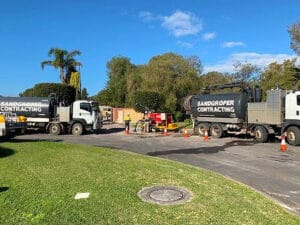 liquid-waste-management-south-west-wa[/caption]With over 20 years of working in WA’s premier wine region has given Sandgroper a vast amount of experience in the cartage & disposal of Brewery & Winery Waste. We are available 24/7 to service your waste needs.

The management of winery wastewater is important to the business and environmental performance of a winery, and it can have ramifications for vineyards and grape production.

A sound approach to wastewater management will involve:

Cleaner production, less waste and more profit within the winery

Easier and cheaper ‘fit for purpose’ treatment of winery wastewaters

More options for secure water supplies to the vineyard

more options to reduce any environmental risks from wastewater discharges.

Improved wastewater management does not have to cost a lot. It may be as simple as beginning with better operations to reduce the wastage of grapes, juice and wine within the winery.

Something most craft brewers probably don’t think about when they begin production is what will happen to the effluent – the wastewater – that remains after the brewing process is complete. Craft brewers end up with an average of three gallons of wastewater for each gallon of beer produced – and this is far below the large brewery average of seven gallons wastewater per gallon of beer. Even so, the wastewater produced while making beer can be taxing to local water treatment facilities and can disturb surrounding ecosystems if it isn’t treated properly.

The effluent produced in beer-making typically contains high levels of suspended solids, mainly the yeasts, hops, other grains and sugars leftover after brewing. These solids can’t be broken down easily by water treatment plants, and they may consume too much oxygen in the process, throwing off the delicate balance of bacteria and microorganisms that sewage plants rely on. Brewing by-products may also be too acidic or caustic, which can cause further problems in treating the water.

Sandgroper Contracting are specialists in winery and brewery waste management. Call us for a free consultation.

If You need waste management we are available for you